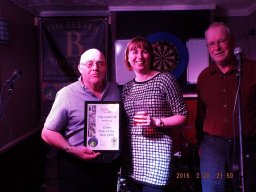 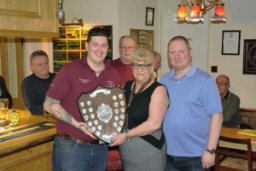 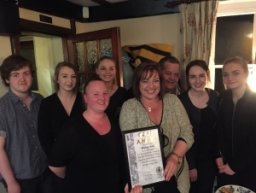 Gold Award - Rising Sun, Leverington
Landlady Maggie Sharman was delighted to hear that her pub had won a Gold Award. We couldn't wait to get to Leverington to see her and her staff receive the accolade.Around 25 members of the branch attended the event, together with a pub full of regulars. The evening was topped off by an amazing buffet.
Presented on Sat 30th April, 2016 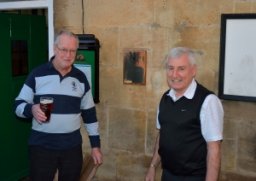 Special Award – The Bull, Market Deeping
The plaque commemorating the founding of the Peterborough and District Branch of CAMRA was replaced with a shiny new brass one. The old one had worn away after 41 years of sun and rain. Bert and his wife Eileen were also presented with a certificate commemorating their long service and commitment to real ale
Presented on Tue 5th April, 2016 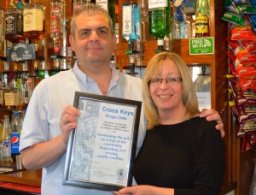 Merit Award - The Cross Keys, King's Cliffe
The pub was nominated by Mike Blakesley a couple of months ago for their commitment to LocAles and as a community hub. About 18 or so branch members were in attendance to see Cross Keys licencees Geoff & Janice receive their Merit Award.
Presented on Fri 17th June, 2016 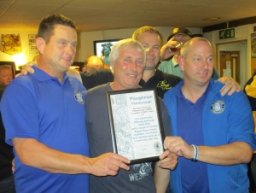 Merit Award – The Ploughman, Werrington
Roy Williamson, who nominated the pub for the award, along with the Simmospoons team of Chris, Stuart and Andy Simmonds 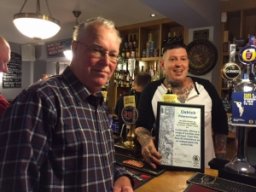 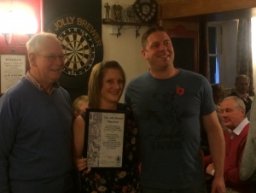